I have had a minor posterior disc bulge since 2001 when I was in mid-twenties. It used to kill me and the pain was very localised to the disc area on my spine. I was tried on various drugs such as Gabapentin, a new neuropathic drug at this time, which failed to help. Neither did Amitriptilyne. I did increase exercise, but that didn't help so much. The Bowen Technique was helpful for the pain, but it wasn't until I started to have intensive physiotherapy in 2008-11 that my back pain was really 'sorted' and that involved doing a lot of core stability work and retraining, which was hard and painful at the time, but radically improved my pain.  I still had bad times with endometriosis until I had a total hysterectomy aged 39 and was then put on Oestrogen HRT patches which is supposed to stablize hypermobile joints, rather than loosen, as progesterone does.

Fast forward a few more years, and I am now 43 and as of three months ago, I start to get more lower back pain which is in the trunk, rather than in the actual spine. I start a campaign of Pilates and core stability exercises, but in walking, these deep core pelvic floor muscles are no longer firing well, yet I have no idea 'where' they have gone! My back slightly improves over time and then as we get to the end of May I have a major flare up of back pain that is localised to the spine and that old disc. I had by this time ordered a spinal support 'wrap' and wore it only a few times, whilst continuing with a 15 minute daily programme of Pilates/old Physio exercises. A few days later I woke up with pain radiating down my left leg. My first thought was that I had forgotten to do some Piriformis stretches the day before, so it was my fault. (My piriformis is always tight!).

I managed to walk in town, but was aware that my left leg didn't feel quite right, but the pain in my back had eased. I was then going to have my hair cut, and I remember this spot in my gluteals (where the sciatica nerve would pass through) was very painful, and sending radiating pain down my left leg. It was hard having to sit for so long.

The following day was even worse, and without knowing it, I was actually walking on the lateral border of my left ankle, rather than through my left foot as I had unknowingly lost sensation in my foot. By the next day I had severe pain in my tibialis anterior and peroneals on the left leg from walking so strangely the day before. My proprioception had badly let me down. I tried self-treating. I got some stronger anti-inflammatory medication, did some Bowen on my leg. My Osteopath was away and so I received a visit from a GP via NHS111 who wanted me to go to A&E on account of some loss of sensation in my left leg, as well as the radiating pain, which I suspected was entirely related to that old disc prolapse.

The following morning, at just before 9am on 1st June I arrived at A&E. To be honest I thought they would fairly rapidly dismiss me, reassure me it was sciatica and to keep up with moving about and painkillers, but they didn't. By early afternoon I was being assessed by the medical doctors (rather than surgical), following A&E doctor triage. The medical team were a little baffled by the lack of sensation in my medial calf, and at some points on the edge of my left ITB. They then returned and told me I needed a rectal examination, but I knew why this was. Anyone who has problems with lack of bladder and bowel control, and it is immediate concern for a condition called Cauda equina syndrome, which is a rare disorder that usually is a surgical emergency. In patients with cauda equina syndrome, something compresses on the spinal nerve roots. As I could feel the rectal examination, this could eliminate Cauda equina, fortunately.

A short while later the medical doctor came back to say that they were admitting me and that we were waiting for a bed on the ward, and that I would be admitted for pain management. They had also used my 'Care Plan' document, and it was very clear they were implementing it. From my point of view this was a real 'thumbs up' moment in that the healthcare professionals were trying to do their best for me and my wishes, although I was still surprised they still hadn't sent me home with painkillers.

By c5pm I reached bed 7 on my ward. I was very impressed with the care shown and treatment in this hospital, it far outstripped other hospitals I have attended (barring one other). 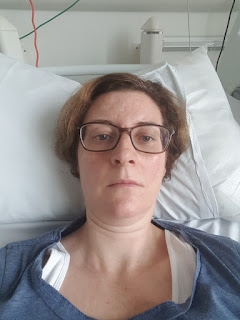 I was later asked to try and walk down the corridor in the ward with a senior registrar. Despite the fact I was limping very bad (more, staggering than walking), he said I was doing really well and that he wanted me to keep mobilizing in this way on a regular basis. The hospital took advice from my pain management consultant at another hospital who created a regime of 20mls of Oramorph every 2 hours. This was fully implemented by the Sunday, and then phased out through Tuesday and I was discharged from hospital on the Wednesday, so it was a five night admission in total. Whilst I was in there I was asked my advice about what  I would want from an inpatient advice book, and helped with this work.

I had a few visitors each day, and although I couldn't walk well, and other patients kept on suggesting I used frames/crutches I had been asked not to. Some people questioned why I was admitted at all, and why for so long, including such a huge increase in opioids. This is a good question, although I did manage to sleep well in the end, something that has been a big problem since I got home.

I had an MRI when I was in hospital which indeed showed that the nerves exiting from L5 were compressed, so the disc had worsened, nor surprisingly, since the last MRI in 2015.

The day after I got home from hospital I went to see my osteopath. I told him the whole story and he spent  most of the session addressing my left glutes, ITB and peroneals/tib anterior. He suggested that I only did 'the clam' and 'cat' as exercises at home, in addition to regular 'short walks.' This I followed to the letter. I am still unable to do pelvic tilts, stretching my left piriformis is still too painful, and I still have bad radiating pain. Apparently it could be several weeks before I am walking properly again. I can walk OK for about 20 minutes, and then I can no longer walk through the left foot, without it simply slapping on the ground (like a 'dropped foot'). I am about to go for a follow up Osteopath session. I have also discussed the idea of some one-to-one Pilates sessions again whilst I am in this acute injury phase.

Another therapist I work with said that he also feels there is a further emotional underlie going on here, and that might have contributed to what I called the final swansong, when the pain had gone down my leg. Just at the moment I feel a complete crock what with all the problems I have in my arms and shoulders due to my bone tumour in the right proximal humerus and also strongly suspected 'Thoracic Outlet Syndrome'. This is really upsetting me as I play the recorder, sometimes quite well, and was offered to do some recitals this month and had to turn them down owing to the pain that the additional practice and rehearsal might cause. All is not well for me just now.
Posted by Isobel at Wednesday, June 13, 2018